They are as much alike as they are different.

One was the son of a physician and died from alcoholism. The other was born to a liquor salesman and died a teetotaler. They are often confused for one another even though they are unrelated. One once worked for the other one as a janitor.

They were both two of the finest writers in American history and helped shape our laws, our customs and our national identity. Both are loved and hated.

They were American critics and this country gave them plenty of fuel for their fiery prose.

They won the greatest prizes given authors, had numerous best sellers and their books were made into movies.

Together they are Sinclair Squared. 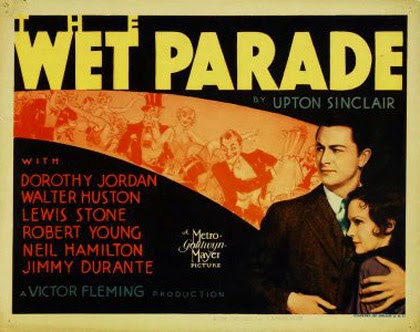 Upton Sinclair's The Wet Parade is finally on dvd labelled as a "pre-code" classic in the Forbidden Hollywood Collection from Warner Brothers. (Volume 6)

Myrna Loy is one of the stars of this film.  She was in a Sinclair Lewis film too, Arrowsmith.  So she was Sinclair Squared too!

The Wet Parade has a nice review in the Memphis Commercial Appeal. http://blogs.commercialappeal.com/the_bloodshot_eye/2013/05/forbidedn.html
Posted by Duke at 2:32 PM